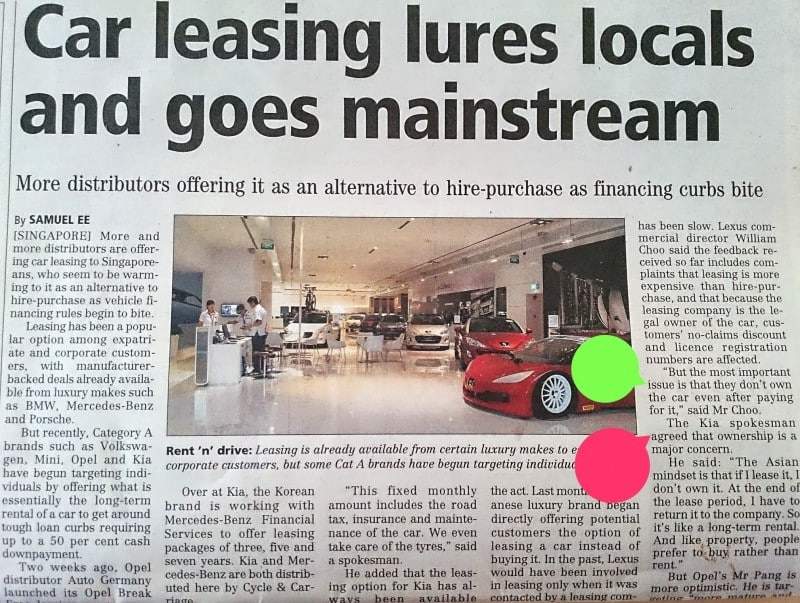 The paper seemed to come to this conclusion after hearing from Opel distributor Auto Germany that a grand total of 10 ( yes, you read it right, ten) Singaporeans have signed up for their leasing scheme. No other numbers were provided from other car showrooms for sign ups by Singaporeans into their leasing schemes. Is it too few to mention or none at all?

This doesn’t fit in with the conclusion drawn. “Mainstream”, to anyone who even considers the word, means that the majority of Singaporeans are now opting for this scheme in order to finance their transport needs compared to the hire purchase scheme that has dominated most new car transactions for decades. This clearly is not the case if only 10 have signed up.

Further contradicting the conclusion is the mention that Kia showrooms have always had the leasing option available – i.e.: the scheme has been long running compared to Opel’s half a month of experience in offering this option.

The customer’s choice has been very different over at Kia. The Kia spokesman hinted that it was never a majority choice for customers with his comments (starting from the pink bubble). Lexus’ commercial director echoed the same difficulties of persuading the Singaporean to accept that all the lease payments still meant no right of ownership and the loss of NCD for car insurance, which I suspect most Singaporean drivers will want to hold onto.

At best, this may be the start of a longer term trend where a small percentage of Singaporeans go for this option. But to call it mainstream right now is jumping the gun. Only time will tell.

This is a reminder of how many cars have been sold in Singapore in the two weeks just passed:

or summarised here below:

Excluding motorcycles and goods vehicles, it is still above 1000 cars sold and put onto the road. So what we have here is 1o out of more than 1000 cars successfully put onto the road. If you consider the possibility that out of these 10, some were not sucessful in obtaining the COE, the ratio even smaller – during the same exercise, the number of bids received is well above 1000.

According to the news, we now have a mainstream majority of 10.

Goh Marcus
07:28 14 May 20
The best from my experience. Coming from similar trade background, even through difficult times, remote exercise was vital with... precise step by step guide. Thanks Robin & Jasread more

Sin Tan
05:31 15 Apr 20
Was looking to refinance my car and very pleased to come across Sg Cash N Cars. Robin and Jasmine exceeded the expectations i... had. They dealt business with utmost transparency and went the extra mile to find the best deals. Our case was complicated as there were documents to be shipped overseas and back (the covid-19 situation didn't help). The whole process took 3 weeks but they closely followed through till the end. My wife and I are very grateful to meet the both of you. Thank you for accommodating us and stay safe during this period!read more

Ng Jason
14:46 25 Mar 20
Robin and Jasmine were very details and patient in the whole process that makes me very assured in refinancing my car with them.... They compared quotes and shared with me the best deals and the common mistakes in evaluating quotes. I just chance upon them via Google and did not regret my decision to go with them. I would highly recommend them.read more

Cash Ong
06:27 25 Mar 20
In the hunt for COE renewal quotes, Robin and Jasmine were the only ones who replied in an non-automated email template response... manner. The first meeting was informative and strangely enjoyable as we would also chit chat about other stuff. What started as a service inquiry ended up with making new friends. PS - it also helped that they were VW enthusiasts 😝 Thanks Guys for helping me keep my beloved baby bug!read more

Gershon Koh
03:00 05 Mar 20
Robin helped me get the best quote for my vehicle, saving me almost 50% from my previous premium. He also negotiated on my behalf... to save a few hundred more, which I really appreciate. Thanks Robin for the help, I look forward to engaging your service again in future!read more

A Google User
04:56 27 Feb 20
Jas and Robin helped me with my COE renewal and it was an extremely pleasant experience dealing with them. Keep up the good work... and highly recommended!read more

A Google User
05:46 13 Feb 20
Look no further guys Contact them immediately! Professional Transparent Hassle free service by Mr Robin and Jasmine... :) Financing my first Commercial Vehicle for Bus Loan with them was a Blissful experience. Thank you Mr Robin & Jasmine for making my dream of buying a bus a Reality!read more

iskandar jamaluddin
04:41 06 Feb 20
Robin and jasmine are professional.Easy and fast transaction.what else can i said 5 star for them for the good job they have... done.recommended.read more

Melvin Tan
07:15 30 Apr 19
What started as a simple text enquiry for COE renewal for our Toyota Wish, turned into us getting a new car instead. We’re... extremely glad that we came across Robin and Jasmine, as the advices and service provided was exceptional. They were patient and attended to all our queries and needs, also helping us to secure the best deal both for loans and insurance. Definitely recommend them for any automobile related services, if you have any request, just drop them a call or pop by their cosy office. I’m sure they’ll be more than glad to attend to your queries!read more

If you do not receive an email reply within 24 hours to let you know we have received your request, you may wish to call 92782880 or click on WhatsApp Us button to text us directly.